By Nicole Kaplan | Back to School, CCSD Info, Community, In The News, Schools Info | No Comments

Connecting Kids Nevada is a new program to connect students with technology. Visit connectingkidsnv.org to learn more about how families can obtain internet connectivity and technology assistance. A Family Support Center has also been created to assist Nevadans. Families can call 888-616-2476 and talk to a representative in English or Spanish.

Information is also available for organizations and individuals interested in supporting this program through donations. A link is available here.

The  Nevada COVID-19 Response, Relief and Recovery Task Force, The Elaine P. Wynn & Family Foundation, Communities In Schools Nevada, and The Public Education Foundation have joined forces and announced today the introduction of “Connecting Kids,” a statewide community coalition formed to ensure that all students across the state of Nevada have equal access to virtual learning for the start of the 2020-2021 school year.

Beginning with the Clark County School District and expanding to all school districts across the state, the community coalition is committed to getting all students online and connected to their school. To achieve this goal and reach all 312,000 students within the district, CCSD has created a brief survey for all families to answer which can be found at www.ccsd.net/survey. Additionally, The Family Support Center through an innovative partnership with Cox Communications and CCSD has been established to connect every qualified CCSD student to the internet, subsidized by CCSD. The Family Support Center can be reached at 888-616-2476 and will have English and Spanish speaking operators available Monday – Saturday, 7:00 am – 6:00 pm, beginning Tuesday, August 11, 2020.

By Nicole Kaplan | Back to School, CCSD Info, Community, Schools Info | No Comments

By Nicole Kaplan | Back to School, CCSD Info, Schools Info | No Comments

These are but a handful of the elite colleges and universities that more than 100 students from Clark County School District’s Class of 2019 will be entering this fall.

On Aug. 2, Clark County School District held its first-ever Super Scholars Recognition Luncheon in which students were honored for their acceptance into the nation’s top colleges and universities, based on the rankings compiled by U.S. News & World Report.

The students who were able to attend the luncheon and roundtable were recognized for their accomplishments by Superintendent Dr. Jesus F. Jara and School Board Trustee Dr. Linda E. Young.

In addition to the luncheon at The Public Education Foundation, which the nonprofit organization hosted, Dr. Jara led a roundtable discussion of these high-achieving students.

Students explained why they chose the colleges they’ll attend in the fall; shared with Dr. Jara the stories of teachers, counselors, principals, parents and others who went above and beyond to inspire them; discussed the importance of a school’s environment in promoting learning; explored the impact of the socio-economic gap that can hinder academic achievement, an issue Dr. Jara noted that CCSD’s Focus: 2014 strategic plan is addressing; and discussed other issues confronting public education.

Welcome Back to School

By Nicole Kaplan | Back to School, CCSD Info, Schools Info | No Comments

Take a look at some of the events that transpired on the first day of the 2019-20 school year.

Busy morning at the Wallace Bus Yard! Welcome back students and staff. Let’s have a great year!!! @SuptJaraCCSD @Trustee_Brooks 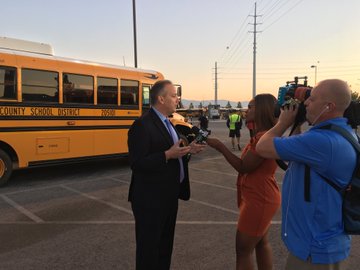 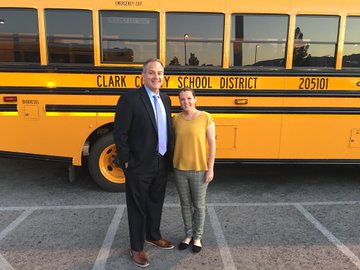 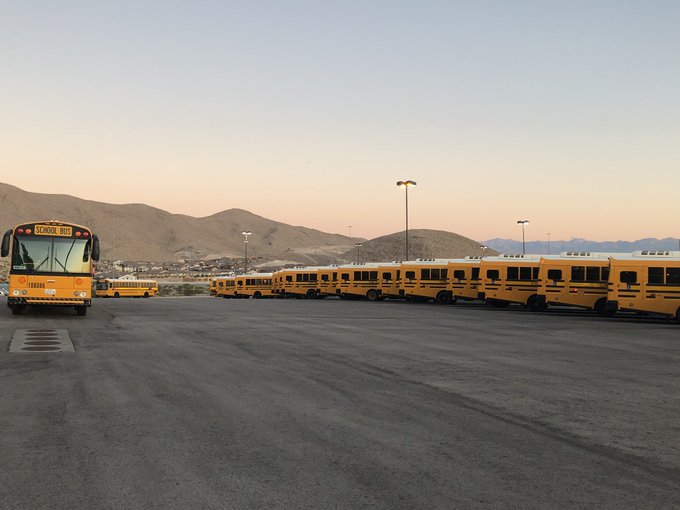 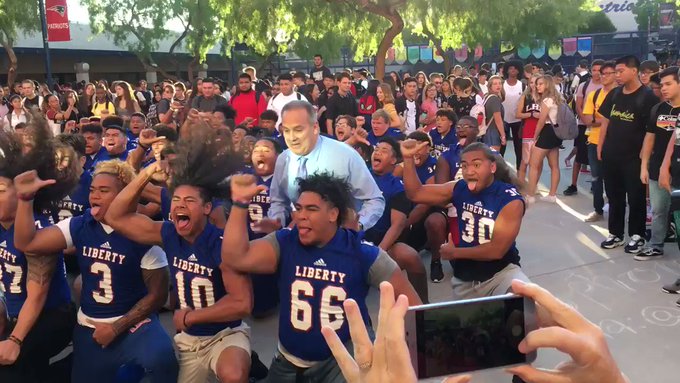 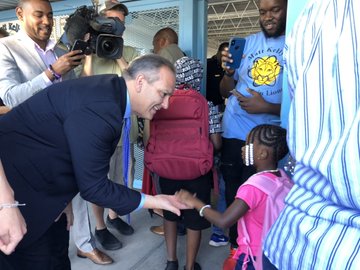 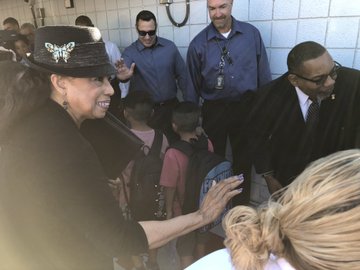 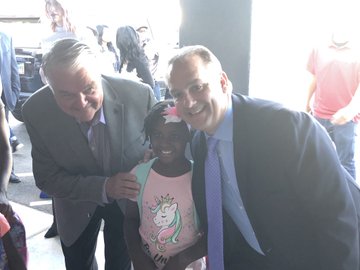 Proud to welcome the kids from Matt Kelly Elementary this morning! Thank you @NVYouthNetwork for all your tireless work on behalf of all our kids. Have a great first day of class! 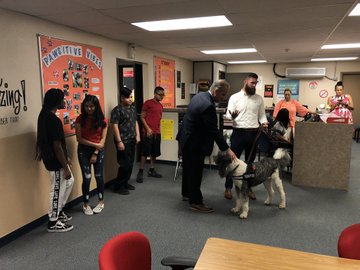 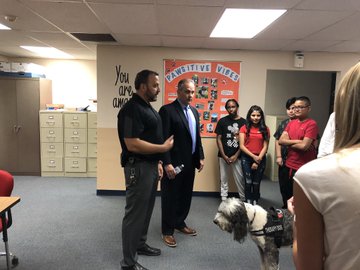 .@SuptJaraCCSD and @RepSusieLee welcomed students at Bonner ES this morning! Congratulations on your classroom additions, they look amazing. #FirstDayOfSchool #1ForKids 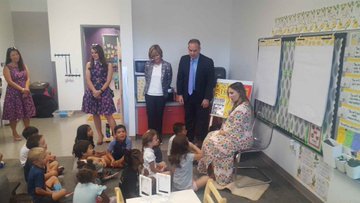 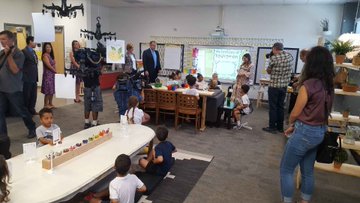 Thanks to our community partners for helping our @SETechTweets students prepare for career readiness by providing them with work gear for apprenticeship programs as CCSD launched http://apprenticeship.ccsd.net . @onestopcareerNV @RTCSNV #MartinHarrisConstruction #1ForKids 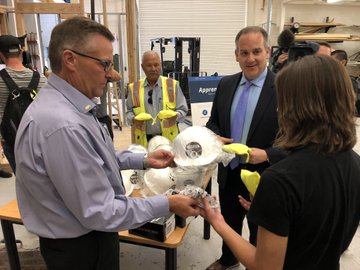 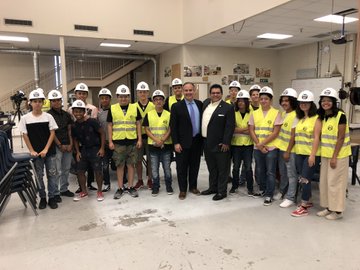 Thanks for the wonderful tour, Principal Hybarger of Abston ES! @SuptJaraCCSD and @TrusteeFord are enjoying greeting students and checking out their brand new school. The space theme is pretty cool! 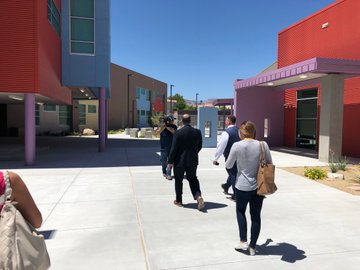 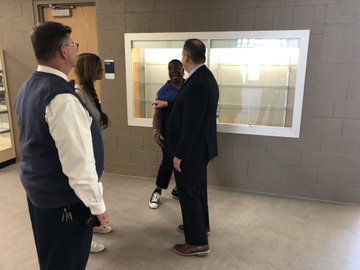 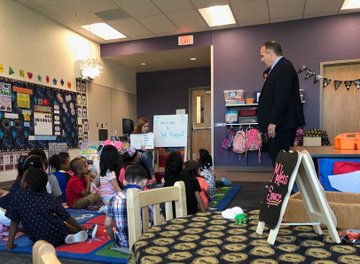 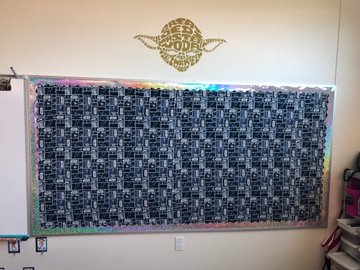 By Nicole Kaplan | Back to School, CCSD Info, Community, Employee Info, Event, In The News, Schools Info | No Comments

The Clark County School District (CCSD) will assist students and families as they prepare for the 2019-20 school year during the 12th Annual Cox Back to School Fairs, being held at local shopping malls during July and August.

There will be over 50 booths at the fairs; various booths will be staffed by CCSD personnel, while the others will represent community agencies, nonprofit organizations and businesses. School-required immunizations will be offered only at The Galleria at Sunset, The Boulevard and Meadows Mall fairs. Costs will range from no co-pay to low-fee and no charge, depending on a family’s insurance status. Parents are advised to bring their child’s immunization record and insurance card.

By Nicole Kaplan | Back to School, Schools Info | No Comments

As we prepare for the new school year, CCSD is asking the community to help students be prepared. We are collecting school supplies for our students in need so that they can be successful.

If you want to help a school near you, we suggest you visit the CCSD Support a School site at https://ccsd.net/schools/support-a-school/. Schools post their wish lists on this site for materials and supplies to be used directly in the classroom.

Some of the suggested supplies include:

You can either contact the school to deliver the items, or contact the School-Community Partnership office for assistance at 702-799-6560.

By Nicole Kaplan | Back to School, Employee Info, In The News, Schools Info | No Comments

Matt Kelly Elementary School hosted its third annual Back-to-School Red Carpet event where community and business leaders joined to welcome students back with an inspirational welcome, via red carpet. As reported by the Las Vegas Review-Journal, the event also included a surprise for Principal Alaina Criner: Local philanthropist Robert Ellis presented the school with a $10,000 donation, adding Kelly to his roster of adopted schools.

Crestwood Elementary School celebrated the opening of its new 22-classroom building to replace portable classrooms on the campus. The principal and assistant principal dressed up in butterfly attire in connection with the school’s motivational theme based on the “butterfly effect.” A total of 19 CCSD schools will open new classroom additions for the 2018-19 school year to alleviate overcrowding.

Dennis Ortwein Elementary School’s namesake sang a song and officiated at the ribbon-cutting for one of the district’s four new schools that opened in the 2018-19 school year.

An event at Chaparral High School highlighted the partnership of CCSD and JAG (Jobs for America’s Graduates) of Nevada. At Chaparral, combined efforts have increased the school’s graduation rate and improved student’s job readiness skills.

As KTNV reported, Roger D. Gehring Academy of Science and Technology, one of three new Magnet Schools, put the spotlight on its STEM (Science, Technology, Engineering and Mathematics) program. The school’s new name was unveiled during a special ceremony.

At Becker Middle School, students learned about SafeVoice, a statewide, anonymous reporting system that can be used by students, parents and others to report threats to the safety or well-being of students.

Gov. Brian Sandoval was among the special guests as Tesla representatives and education leaders from across the state gathered at Cimarron-Memorial High School to reveal new robotics opportunities that will be available to a number of students, teachers and organizations throughout the state in the new school year. As the Nevada Independent reported, “Last month, Tesla unveiled $1.5 million in grant money as part of the electric carmaker’s commitment to science, technology, engineering and math (STEM) education in Nevada.” KLAS also reported on the Cimarron-Memorial event.

Members of the Board of School Trustees, as well as Superintendent Dr. Jesus F. Jara, took part in many of the day’s events.

By Nicole Kaplan | Back to School, Employee Info, Hero Challenge, In The News, Schools Info | No Comments

The donation included approximately $15,500 worth of computers, laptops and supplies, in addition to more than $1,700 in school supplies for teachers.

By Nicole Kaplan | Back to School, Event, In The News, Schools Info | No Comments

A fourth new school, Dennis Ortwein Elementary School, also will open for 2018-19, with a ribbon-cutting set for Monday.

The addition of these four new schools brings the total number of CCSD schools to 360 for the 2018-19 school year.

By Nicole Kaplan | Back to School, Employee Info, In The News, Schools Info | No Comments

CCSD invites you to dust off your old photo albums and take part in a special Throwback Thursday on August 16. Post a school throwback photo on social media using the hashtag #CCSDTBT.